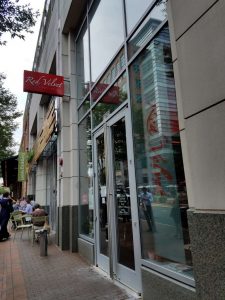 He does not believe there will be an eighth.

“I feel very, very, very confident that they are planning not to renew our lease, and they’re stonewalling us,” Gordon said. “This is all retaliation, plain and simple.”

Gordon has been one of the most outspoken opponents of paid parking at Reston Town Center, initiated in January by RTC owners Boston Properties. Gordon was one of the organizers and is the mouthpiece for the Reston Merchants Association, a group of business owners and managers at RTC fighting the system.

Now, as Gordon looks at negotiating a lease extension with his landlord, he believes the spotlight he’s put on himself through the Merchants Association is making such an extension impossible.

“I have no doubt that they are retaliating against me and Red Velvet Cupcakery for being one of the leaders of the fight against paid parking,” he said. “I have a whole timeline of reasons I believe this to be true.”

We reached out to Gordon’s landlord, Boston Properties, and were told by spokesperson Marion Myers that “lease negotiations with tenants and prospects are not communicated publicly until both parties are in agreement.”

Gordon said Red Velvet Cupcakery’s lease at the Town Center comes up in May. Last year, he said, he was in negotiations not just to renew, but to bring another of his concepts, Bakers and Baristas, to the Town Center as well.

“Before this whole battle, they loved Red Velvet, they loved me as an owner, and they loved the new concepts I [would be] putting in,” he said. “Until, of course, now.”

Gordon says he is almost certain there will be no agreement with the landlord, as he feels they are going out of their way to make sure he knows he is no longer welcome at the Town Center — where he says he makes a “fairly modest but steady income” despite what he says is an 8-10 percent drop in sales in 2017.

“We received a message from them — we couldn’t even get a meeting — that, basically, they’re looking for new and fresh ideas and they want to scour the marketplace, and we may not fit into their plans, but they won’t know until the end of the year,” he said. “In my mind, this is ‘Shut up until the end of year, because we’re considering you, but we’re looking for new and fresh ideas.’ The whole thing is ludicrous.”

He said he isn’t in any official talks yet about a new home, but he is considering numerous locations around the area, from Ashburn to Tysons.

“That being said, we’d ideally like to stay in Reston,” he said, owing to a great community, loyal customers and a Reston-based workforce force. “My hope would be that we can attract new customers in a new location and that we can keep our old customers [as well].”

Gordon said that at a recent meeting of the Reston Merchants Association, some members reported a “slight uptick” in sales since parking rules were loosened to allow an hour free during the day and no charge after 5 p.m. However, he added, the average company is still down around 25 percent from this time last year.

“I posed the question [of whether] people feel their sales will ever get back to normal,” Gordon said. “About half the owners said we would probably get back to past levels of sales if and only if paid parking was completely taken back. The other half said we’ll never get back to past sales, because we’ve lost many of our clients forever. They’ve sworn off the Town Center and changed their buying patterns.”

He said the group would meet again soon to check in with each other and continue to discuss how they’ll move forward, including with the possibility of legal action against their landlord. (Boston Properties has said it is “very confident” it will prevail in any legal action, though Jackson’s won a preliminary injunction in its case to keep parking for its customers free.)

“When you’re in retail, your landlord and your shop are in a partnership. We’re supposed to work together, in concert,” Gordon said. “In this case, our landlord is definitely not working for our betterment. One very wealthy company is out to ruin 100 other companies they are supposed to be partnering with, for a quick money grab with no long-term vision.”

Personally speaking, though, Gordon said his involvement in the fight against paid parking might change a lot if and when his business on Democracy Drive closes its doors.

“If we’re not renewed, I’ll have very different feelings, as you can imagine, toward my landlord,” Gordon said. “I can’t help but saying I’ll care a whole lot less about the future of Reston Town Center.”

END_OF_DOCUMENT_TOKEN_TO_BE_REPLACED

More Stories
What’s Going On Around Reston This Weekend?In The Design Studio: Four Ways To Make Your New House Feel Like Home