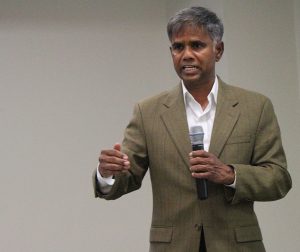 (This article was updated at 6 p.m. to clarify information about interest payments on the loan.)

Speaking to members during a community budget meeting Thursday night, Reston Association’s treasurer made the argument for why the $2.4 million that remains on the Lake House loan should be paid as soon as possible.

Sridhar Ganesan explained to the small crowd at Reston Association headquarters that excess money is available in RA’s operating reserves that may be best used by taking care of the loan once and for all.

“I think the risk is pretty low [and] from a cash-flow perspective, I’m pretty comfortable [paying the loan off],” he said.

If the loan continues to be paid off through 2025, as is currently scheduled, Reston Association will be making payments of about $182,000 each year. In addition, there will be a $1.57 million balloon payment due at the end of the payments. Ganesan said interest rates are likely to increase between now and then as well, and refinancing costs would apply if RA decides to go that route.

Ganesan said that as Reston Association’s operating reserves have never fallen below $4 million — and peak at around $12 million each year as assessments are collected — funds are available to be taken from the account and used to pay off the loan now. Ganesan said interest on the loan collects at about $80,000 per year, while the idle operating reserves only gain about $59,000 in 2016.

Monthly operating spending for RA is about $1.25 million, Ganesan said.

“So the question is, what do we do? … Should we use that [reserve] money, that idle money, to pay off the loan?” Ganesan asked. “This is a question that we need to address, and we’d love to get comments from the public as well.”

Paying off the loan would result in RA’s projected 2018 member assessment rate decreasing by $8.66 per household, Ganesan said, and future assessment rates would benefit from having the loan off the books. The 2018 assessment was projected in the budget’s first draft at $678.

Ganesan was asked whether he would have suggested paying for the Lake House property in full from reserve funding at the time of acquisition rather than borrowing the money. He said, if he were comfortable with the investment and the price was right, that “absolutely” would have been his suggestion.

The Lake House is projected to bring in about $143,000 in 2017, well below the $300,000 estimate that was in the budget. Ganesan said its budget projection for 2018 is $230,000 — with about $340,000 in expenses. He said RA is considering changing the way the Lake House operates in order to begin closing that gap, including possible expansion of operating hours and changing to an all-rental model (as opposed to offering programming there).

No decisions on the budget have yet been made.

The RA Board will have a special budget meeting, open to the public, Monday from noon-5 p.m. Members will also have an opportunity to discuss the budget with the Board of Directors at the Oct. 15 Lake House open house. Public hearings on the final draft of the budget will take place Oct. 26 and Oct. 30, and it is due to be finalized at the Board’s Nov. 16 meeting.

Thursday’s community meeting was recorded by Reston Association staff and will be made available on its YouTube channel soon.