During a special Monday afternoon session (video), the Reston Association Board of Directors voted to guide staff toward using operating reserves to pay off the remaining $2.4 million on the Lake House loan as the 2018 budget is compiled.

Sridhar Ganesan, treasurer and At-Large member, shared information with directors about what he says is a “low-risk” option that would benefit members. CEO Cate Fulkerson said staff “strongly desires” the loan be paid off this year using the reserves.

“These are things we should consider as a Board, but my own perspective is [that] if we cannot put the money to work in other areas, [then] this is like returning money back to the shareholders,” Ganesan said.

Ganesan said RA’s operating reserves have never fallen below $4 million, and that they peak at around $12 million each year as assessments are collected. Given this information, he said, there is little concern associated with funds being taken from the account and used to pay off the loan now.

Ganesan had earlier shared this information with members during a community budget workshop last week. Taking care of the loan would reduce the assessment rate by $8.66 in 2018.

Director Julie Bitzer (South Lakes District) asked whether Ganesan and staff had considered making the payoff in multiple stages instead of all at once, if the Board is “nervous” about taking so much from reserves. Ganesan said he believes there is no reason to be uncomfortable about taking the money from reserves in one lump sum.

“You have enough cashflow coming in [from assessments] in order to meet the expenses in case there is [any] problem,” he said. “[Even if] on March 1, only 50 percent of members have paid their assessments — that’s a real problem, that’s a crisis. But even then, we have collected 50 percent of assessments; that’s $7.5 million.” 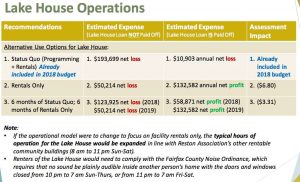 In addition, directors discussed rentals and programming at the Lake House with Laura Kowalski and Mike Leone, RA’s deputy director of recreation and communications director, respectively. In Ganesan’s budget projections, he says that possible expansion of operating hours and increasing the ratio of rentals to programming at the facility would increase profitability.

Afterschool programming at the Lake House, which begins at 2:30 p.m. each day, can hinder the opportunity to rent the property out for daylong corporate retreats, Leone said.

“Most businesses, if they want to do a retreat offsite, typically are looking at wanting to come in at around 8 o’clock in the morning … and then they want to go until, at a minimum, 4 or 5 o’clock in the afternoon,” he said. “They really don’t have that [opportunity] today because, realistically, if you’re doing a corporate meeting there you have to be out at the latest … at about 1:30.”

The Board guided staff, as it compiles its 2018 budget projections, to consider ending afterschool and other programming at the Lake House while maintaining a summer camp there. This would allow for evening rentals in the summer and all-day rentals the rest of the year.

The Board also voted to guide staff to move forward with considering expansion of rental hours at the Lake House to 8 a.m. to 11 p.m. on Saturdays and Sundays, which would put it in line with RA’s other rentable properties. Renters would need to comply with the Fairfax County Noise Ordinance.

Director John Mooney (North Point District) said he was concerned about being fair to those who are already under contract for afterschool programming. He suggested contacting them immediately to let them in on the discussion.

No official decisions have yet been made on the budget or about 2018 Lake House operations.

Board guidance on the second draft of the 2018 budget must be completed at their Sept. 28 meeting. Another community budget session is slated for Sunday, Oct. 15, followed by public hearings on Oct. 26 and Oct. 30. The budget is to be approved during the Board’s Nov. 16 meeting.