UPDATE: Thank you to our community for the assistance. Jessiah McCollum has returned home. #herndonpd pic.twitter.com/mh8azIaZWo 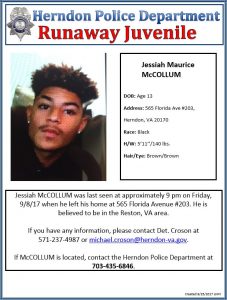 The Herndon Police Department is asking for the public’s help to find a runaway juvenile from the community.

According to a flyer released by HPD on Twitter, 13-year-old Jessiah Maurice McCollum has been gone from his home at 565 Florida Ave. for more than two weeks. He was last seen at about 9 p.m. Friday, Sept. 8.

McCollum is black, 5 feet 11 inches tall and about 140 pounds. He has brown hair and brown eyes. Information on the flyer states that he is “believed to be in the Reston, VA area.”

Anyone with information about McCollum’s whereabouts is asked to contact Detective Mike Croson at 571-237-4987 or [email protected], or call the police department at 703-435-6846.