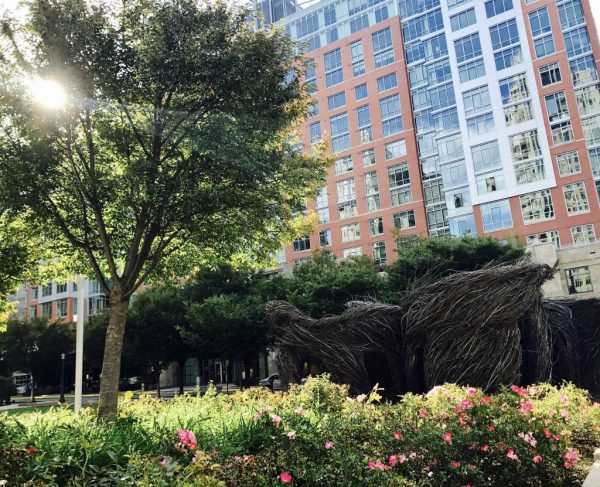 “A Bird in the Hand,” a nest-like sculpture made from tree saplings in Reston Town Square Park, will get a celebratory send-off on Saturday ahead of its removal next week.

The 14-foot-high sculpture, which rests across from the Greater Reston Arts Center (12001 Market St. #103), was created by artist Patrick Dougherty in 2015 using ash, hickory, red maple, oak and willow saplings.

The center will celebrate the art piece’s impact in creating an immersive, magical experience since its installation, according to a release by the center:

“The work’s popularity with adults and children has been manifested in thousands of games of tag and hide and seek played within its woody realm. This project was a communal, participatory experience both through its funding and installation. Sculptor Dougherty spent weeks on-site constructing the sculpture in tandem with a team of community volunteers who contributed enormously to the creation process.”

The celebration is free and will include projects involving sticks and nests, and dance performances sponsored by the Reston Community Center. Artists from Gin Dance Company and GroundShare Arts Alliance will perform dances connected to the sculpture and a documentary film about the sculpture by director Rebekah Wingert-Jabi will play all day in the GRACE gallery, according to the release.

The installation must be removed because it was created from harvest samplings, which typically last for roughly two years, said Erica Harrison, GRACE’s associate curator and festival director. Preliminary discussions are underway to determine what will replace the sculpture in the spring of next year, she said.

The center hopes to bring a new installation that culminates its exhibition of artist Sue Wrbican’s work. Her art, which examines the relationship between time and space, is on display at GRACE through Nov. 18.

Early sponsorships for the future art installation have been secured from the Reston Town Center Association and the Reston Community Center, Harrison said. Final project approval is pending.

END_OF_DOCUMENT_TOKEN_TO_BE_REPLACED

More Stories
Watch Out: Airbags Stolen Locally May End Up Being Installed in Cars at Repair ShopsReport: Wegmans Close to Agreement for Store Near Future Town Center Metro Station