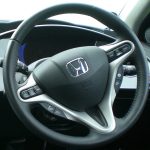 A series of airbag thefts reported recently near Herndon is part of a countywide and national trend, police say.

The past week’s crime recaps from the Fairfax County Police Department included four reports of airbags being stolen in the area, as well as one report of a stolen steering wheel. All of the reports came from the same area off Frying Pan Road, near Fox Mill and Coppermine roads.

Pfc. Emmilie Cherry, of FCPD’s media relations bureau, said there isn’t a lot of information available about the thefts, but they aren’t limited to this area.

“There have been thefts throughout the county of airbags being stolen from vehicles,” Cherry said. “We don’t know the exact reasons they are being stolen, but a guess would be re-selling it to auto-part stores.”

This isn’t the first time this issue has arisen. In the early months of 2014, the Washington Post reported, more than 50 such incidents took place in Fairfax County. It’s is an issue that has been of concern for as long as airbags have been an aspect of car safety, as evidenced by a 1995 New York Times article featuring the headline, “As Automotive Air Bags Become Common, So Does Stealing Them.”

As automobiles are laden with more expensive accessories, thieves have become more specialized and crafty, quickly outwitting both car owners and dealers. And air bags, which can fetch hundreds of dollars on the black market, have become a prized prey. They are easily removed, portable and sought by disreputable repair shops that can profit by installing the stolen part — in some cases in cars whose original bags were stolen.

The National Insurance Crime Bureau says airbags retail at about $1,000, while they can be purchased on the black market for between $50 and $200. The disreputable repair shop pockets the difference, the NICB says.

The NICB offers these tips to avoid becoming a victim of such fraud when an airbag is being replaced:

Media reports from around the nation indicate the thefts often occur from Honda vehicles.