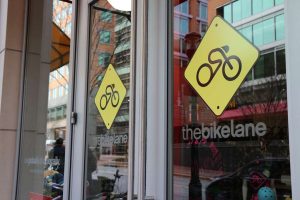 As the owners of The Bike Lane prepare to leave Reston Town Center for a new location in the community, they have another issue weighing on their minds as well.

The bike shop has had its feathers ruffled by a new Loudoun County brewery with a similar name. According to its Facebook page, Bike Lane Brewing plans to open Oct. 21 at 101 Loudoun St. SE in Leesburg, about 1/4-mile from where the W&OD Trail crosses King Street in the town.

In a letter emailed to customers Thursday and posted to Facebook today, The Bike Lane owners Anne and Todd Mader say they are in no way affiliated with the brewery and are taking legal measures to clear up the issue.

We learned that this company was planning to open about five months ago. Since that time, we have cordially asked them, numerous times, to change their name. We feel that having a business named so similar and located on the same trail (the W&OD), only a few miles away, will confuse both our current and future customers. This company has refused to change their name, so we are left with no other option than to ask the courts to have them change their name.

When reached by Reston Now for comment, Bike Lane Brewing co-owner Greg Perlberg challenged the assertion in the statement from The Bike Lane that they have “cordially asked” him to change the name of his business.

“We have only had legal contact with them regarding this,” he said.

He declined further comment, citing advice from his attorney.

In its letter to customers, The Bike Lane says it plans to stay near the W&OD Trail in Reston when it leaves RTC. As part of the move, the Maders say, they will expand to include their own micro-brewery and coffee house. This further complicates matters with the new Leesburg brewery, they say.

With all of this, we feel it is extremely important that we protect our brand and name. As you can imagine, having a brewery with the same name will not only confuse customers but it will likely distract from both of our businesses. The last thing Todd and I want is to get in the way of another businesses [sic] success. We are very supportive of this company opening a new brewery, and we wish them all the best in their new venture. We are only asking them to change their name before they open for business to protect the investment we have made in The Bike Lane brand and to protect you, our customers, from being confused.

The Bike Lane has been in its current location, at 11943 Democracy Drive, for nearly a decade. It also operates a shop in Springfield.