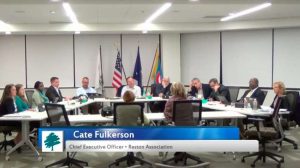 During its meeting last week (video), Reston’s Design Review Board heard a presentation about the large number of covenants requests Reston Association staff handles, and how they can be better handled in the future.

Cate Fulkerson, RA’s CEO, and Anna Varone, RA’s director of covenants administration, informed the panel of RA’s plans to add a post-project approval inspector position to help make sure approved requests are being checked into in a timely manner.

“After you all have made decisions on an application, within a six-month time period, staff is supposed to go and inspect to make sure that what is [to be] done is actually being done,” Fulkerson told DRB members. “A lot of the issues that we have after the fact, after you’ve made a decision — it could be 18 months, it could be two years, it could be 10 years, it could be 20 years after the fact — is that applicants have put things in on a property that is not what you approved.”

At its September meeting, the RA Board of Directors approved the new position as part of the second draft of the 2018 budget. The position is estimated to add $55,885 (salary and benefits) to the budget, which would have a $2.65 impact on the assessment rate.

Decisions about budget items have not been finalized, as the full 2018-2019 budget is slated to be approved by the board in November. Public hearings on the budget are planned for Thursday and Monday nights.

Fulkerson said the new position would just be the latest in a number of changes being made within the covenants administration department as well to help tackle the large volume of inspections that need to be done. These include the digitalization of property files and internal reorganization that has helped the department direct more focus on ensuring “quality interactions” when dealing with members, Fulkerson said.

“[We want] to prevent from going to court, prevent from putting a lien on somebody’s home,” Fulkerson said. “We would much rather have a conversation and get them to understand the important of following the guidelines.”

According to information provided by Varone, the covenants administration department had handled as of Sept. 20 more than 7,900 cases this year. These included more than 5,800 covenants violations, of which about 35 percent were design violations. The department currently has six employees who are primarily responsible for handling inspections, complaints and applications.

Varone and Fulkerson both said the number of cases is increasing year-to-year and the staff is having a hard time keeping pace.

“[Our ability to] meet the expectations of the members is slowing down, because we’re getting way too much volume,” Varone said. “Based on the Deed, we’re supposed to provide approval or a decision … within 30 days. Based on the volume and backup that we have, we’re teetering on not being able to meet that 30 days.”

Fulkerson requested a work session with the Design Review Board prior to its November meeting to discuss how processes could be addressed to help staff better handle the large number of requests it receives.

“This is a partnership,” she said. “I want to collaborate with you all to put those changes in place, because it affects the way we do these meetings going forward.”

Fulkerson said the discussion would include, among other topics, whether DRB’s four different types of meetings can be consolidated to help speed up the process.

The DRB agreed to schedule the work session for 6 p.m. Tuesday, Nov. 14.