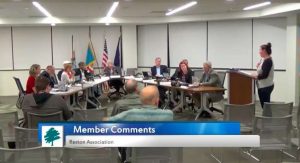 In an effort to generate more revenue, the Reston Association Board of Directors voted at its meeting last week (video) to consider the end of child care at The Lake House when tabulating the 2018 budget and assessment rates.

Summer camps at The Lake House will continue under the new direction. The Board’s decision also allows for the possibility of using the facility for spring and winter break camps, and for “general ad hoc community programming if that did not interfere with being able to rent out the facility.”

The topic was earlier discussed during a special Board session Sept. 18.

Eliminating the afterschool care at the facility will allow for more hours to be designated for rentals, the Board decided at its Sept. 28 meeting. According to the Reston Association website, The Lake House’s rental rates range from $100 to $275 an hour.

While an estimated 647 families participate in camps at The Lake House, only about two dozen children go to The Lake House after school for the “Fit Kids” program.

“In order to benefit, 12, 14, 16 families, we are asking 21,075 [households] to pay $6-$7 in additional assessments,” said Sridhar Ganesan, treasurer and At-Large director, referring to the difference in assessment rate the projected income from additional rentals would bring. “This facility has cost us between $4.25 and $4.5 million. … As a fiscally responsible Board, I would say we need to recover that money, at a minimum, even ignoring the time value of recovering that money, before we think of opening it up and giving it away free.”

The Board voted earlier this month to move forward with using reserve funds to pay off the loan on the facility, which has struggled to make money and continues to operate at a loss since being purchased and renovated by RA.

One affected parent, Erin Gable, addressed the Board to express her displeasure with their conversation.

“The Lake House is for members, not for corporations,” she said. “I get that a lot of money is still trying to be recovered from The Lake House situation, but this is a service to RA members that can be vitally important.”

CEO Cate Fulkerson also said that several affected parents had sent in letters. In the end, though, the Board determined that Reston Association should not be in the child-care business.

“It’s not that I want to take away your child care, it’s that I fundamentally recognize that we have a ton of members whose $6 is a big deal to them … to service a very small number of kids,” said Victoria White, Hunters Woods/Dogwood District representative. “Quite frankly, we’re a homeowners’ association. We’re not a child-care provider.”

Also at its meeting last week, the Board directed staff (video) to include a new position — a post-project approval inspector for the Design Review Board — in the second draft of the 2018 budget. This position, designed to help ensure that repairs and other work done on properties is completed on time and done in compliance with RA covenants, is estimated to add $55,885 (salary and benefits) to the budget. It will have a $2.65 impact on the assessment rate.

Decisions about budget items have not been finalized, as the full 2018-2019 budget is slated to be approved by the board in November.