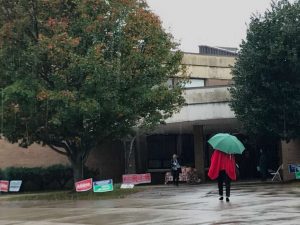 Democrats swept statewide offices, including the lieutenant governor and attorney general. In the Hunter Mill District, Northam won in every precinct with 61 percent of all votes – slightly below the countywide average of 67 percent and above the statewide return of 54 percent. Northam took 30,201 of the 49,788 ballots cast while Gillespie grasped 45 percent of the vote. The tightest race was in the Colvin Precinct where Northam won by a 59 percent to 40 percent margin over Gillespie, who took 54 percent of the total vote statewide.

Overall, voters took to the polls in greater numbers this year. Turnout in the Hunter Mill District was just under 50 percent, roughly six percentage points below the statewide voter turnout of 56 percent.

The Flint Hill precinct reported the highest turnout at nearly 66 percent. The lowest turnout was reported at the McNair precinct where turnout rested at a mum 45 percent compared to the district-wide average of 60 percent.

Voters also passed a measure that would approve the sale of $315 million in bonds to fund school improvement projects throughout the county. The measure passed with 73 percent of the total vote. Locally, the funds would allow the county to move forward on renovations to one modular buildings; additions to three county high schools; renovations to 10 elementary schools, three middle schools, two high schools; and the construction of two new elementary schools.

Democrat Ken Plum, Reston’s current delegate, will also continue serving as the local delegate for the 36th district. Plum, who worked for roughly 20 years as a public school teacher an administrator prior to his role in politics, ran in an uncontested race.