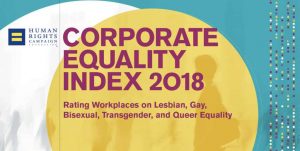 In this year’s Corporate Equality Index, a tool used for 15 years, the organization found a record number of companies are “advancing vital policies” to protect LGBTQ workers around the world, including several in Reston. The foundation is the largest LGBT civil rights advocacy group and lobbying organization.

In a new record, 609 businesses received the top score of 100, up by 18 percent over last year. 947 businesses and firms were rated during the assessment. In Virginia, the average score of the 32 companies ranked was 87 percent. 19 received 100 points, 21 received 90 points and above, and 26 received 80 points and above.

The following companies in Reston were rated:

Each firm was rated across the following categories, according to the release: