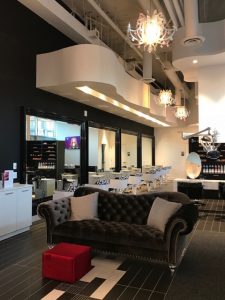 The spa will host an open house on Dec. 4 from 5 – 9 p.m. to celebrate the new move. The business closed its Reston Town Center location last year after 15 years of business.  Spokesperson Heather Shaw Menis told Reston Now part of the decision to not re-up was because of client complaints about parking.

“For more than two decades, Nordine Salon & Spa has been the go-to resource for sophisticated, yet on-trend beauty in Northern Virginia. Our approach begins with a unique combination of timeless and modern sensibilities and continues with attentive care in a blissful environment,” she said.

According to a press release, the salon will feature eight hair stations, a color bar that seats six, three manicure and pedicure stations, and three state-of-the-art spa treatment rooms. Some of Salon Nordine’s most popular stylists from the RTC location will also be returning.

The decor of the business, fused with black and white with 20-foot high ceilings, is modeled after the Italian decor of award winning designer Marcel Wanders, according to the release.

The spa and salon has two other locations in Fairfax in the Mosaic District and another in Gainesville.