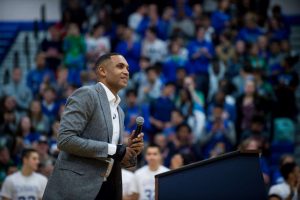 Retired NBA player Grant Hill visited South Lakes High School for his jersey retirement ceremony where he appreciated his Reston roots. The Washington Post published a recap of the ceremony this weekend.

Grant played four teams in his 19-year professional career as a basketball player in the Detroit Pistons, Orlando Magic, Phoenix Suns and Los Angeles Clippers. He was a seven-time NBA Allstar. As an eighth grader, Grant wore a tie to Langston Hughes Middle School in order to match the dress code of South Lakes High School’s basketball team, which had a dress code on game days.

No Seahawks basketball player with wear No. 32 again after the retirement ceremony. Local teachers and attendees told the Post the Grant’s presence brought closure to the community.

“Not only athletically but socially as a citizen of Reston, Grant brought a lot to the community with his overall demeanor in everything he does,” said Wendell Byrd, who stepped down as South Lakes coach in 2007. “Grant went away and continued to blossom and tonight he shared with the Reston area that ‘I’m still a Reston kid.’ ”

Junior point guard Cameron Savage told the Post that he felt like Grant opened up to the community in a cordial manner.

“For him to come back, it means the world for us,” Savage told the Post. “He had so much success, but he came back and treated us like we’ve known him for 30 years, he treated us like we were his best friends. Tonight was special.”