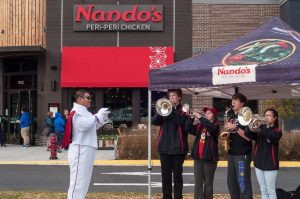 To celebrate its new location on 2120 Sunset Hills Road, the chain donated 100 percent of all sales, excluding alcohol and taxes, to the two schools. In 2019, Herndon High School will use funds to send the marching band to represent the United States at the 75th Commemoration of D-Day in Normandy. South Lakes High School will use the donations to send their marching band to Hawaii to perform at the 2017 Pearl Harbor Memorial Parade, in addition to supporting other program needs.

Though the two schools are traditionally rivals, Nando’s said students from the two bands happily came together to raise money through the fundraiser.

“Nando’s likes to be good neighbors, and we couldn’t be happier with the community turnout in Reston,” said Sepanta Bagherpour, Nando’s vice president of marketing. “Students and parents at both high schools worked so hard to spread the word in their community, and to show support for their schools.”