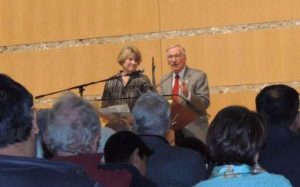 Ahead of the 2018 Virginia General Assembly, Reston residents will have a chance to discuss important issues with state Del. Ken Plum and Sen. Janet Howell, both Democrats who represent Reston.

Plum, 76, is in his 37th year representing the 36th district in Virginia’s House of Delegates. The retired teacher and school administrator recently told the Richmond Times-Dispatch he is eyeing the top position in the House, posing a challenge to current House Minority Leader David Toscano, a Democrat of Charlottesville.

Howell has been a state senator since 1992, prior to which she was a PTA president, community association president and chair of the State Board of Social Services.