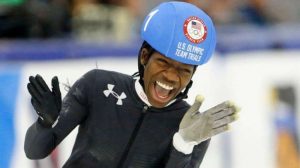 Over the weekend, Maame Biney, a Reston native, became the first black woman to qualify for the U.S. Olympic speedskating team.

The 17-year-old native of Ghana won to two short track trials in Kearns, Utah on Saturday. According to the Associated Press, Biney set a “blistering pace” by taking an early lead.

Biney will be the youngest member of Team USA’s women speedskating team. She is the second black speedskater on a U.S. Olympic team.

Shani Davis, 35, was the first black athlete to win an individual gold medal at the Winter Olympics. He was 19 when he qualified for a short track team in 2002.

Biney immigrated to the United States from Ghana when she was five years old. The Washington Post reports she grew up around Reston’s Dominion Speedskating Club, where she first began practicing to learn the sport.

The 2018 Winter Games will take place in February in Pyeongchang, South Korea.