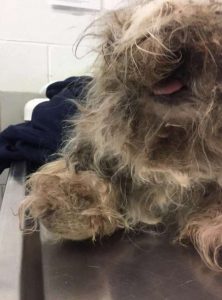 Abused Dog Found in Lake Anne — Local police found an abused dog in Reston last week in the area of Chatham Colony Court and Moorings Drive. The dog was barely recognizable and had nearly two pounds of matted hair covering its face and body, according to the report. Police continue to search for the owner. [FCPD]

NBC4’s Angie Goff Reflects on Growing Up in Herndon — In an interview with Washingtonian, an anchor and reporter on NBC4 reflects on growing up at Herndon High School and working at a local Chuck E. Cheese’s. [Washingtonian]

Last Day to Donate for Toys for Tots Campaign — Today is the last day to donate for the Fairfax County Fire and Rescue Department’s toys for tots campaign. Donations are accepted at all fire stations in Fairfax County. [FCPD via Twitter]