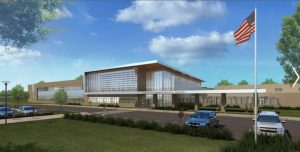 Langston Hughes Middle School (11401 Ridge Heights Road) could get some relief soon as a plan by the Fairfax County School Board to renovate and expand the building was approved by the Reston Planning and Zoning Committee last night.

In an unanimous vote, the committee approved the plan, which includes a new two-story addition with an elevator at the front of the building, an updated hall of nations that cuts through the building’s center, a large  lecture hall, a new roof, an expanded cafeteria, an upgraded art room and an outdoor courtyard.

Currently, the one-story building has a gross floor area of roughly 132,000 square feet and eight temporary classrooms that will be removed if the project receives its final approval from the county. A public hearing on the project is set for Jan. 10 at 7:30 p.m. The county’s planning and zoning staff have not yet released a technical report on the plan.

The building is operating at 115 percent of its capacity for middle schools, according to current capacity utilization rates, which are calculated based on 2014 and 2015 attendance rates. By 2022, capacity utilization should dip to 80 percent, which is considered a surplus in capacity by the county.

By referendum, voters approved to allocate dollars for the project, which is expected to total roughly $41.7 million in construction-related costs.