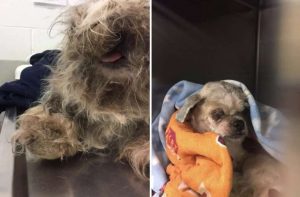 Animal protection police officers are looking for the owner of an abused dog found last week in the area of Chatham Colony Court and Moorings Drive.

Police said the dog was “barely recognizable” and had nearly two pounds of matted hair covering is face and body. One of the dog’s eyes was visible and the other was infected and may not be functional. Anyone who recognizes this dog or knows where its owner lives is asked to contact the Animal Services Division at 703-691-2131.

Local law enforcement also arrested a man who refused to leave a restaurant on the 46000 block of Community Plaza on Saturday. Deputies from the Loudoun County Sheriff’s Office arrested and charged Fabian Gutierrez-Rodriguez, a 28-year-old Reston resident with public intoxication, police said.

On Sunday, sheriff’s deputies arrested Cristopher Duarte-Alvarado, a 21-year-old Herndon resident, in connection with an incident involving property damage. Duarte-Alvarado was located by the Town of Herndon Police Department on Old Ox Road and was transported to a local hospital. He was then charged with driving under the influence, driving on a suspended driver’s license, and hit and run. He was released on a summons for the charges.

The same day, sheriff’s deputies arrested Ekoue Doe-Bruce, a 43-year-old Herndon resident. He was charged with driving under the influence and is being held at the Loudoun County Adult Detention Center.

Other reports from the Reston District over the past week included: