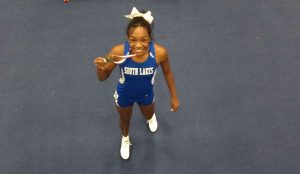 South Lakes High School’s track and field team made a strong showing at Liberty University’s Christmas invitational over the weekend.

In her first indoor high school track meet, sophomore Hannah Waller won the girls’ 55-meter race, setting a school record of 6.94. During trials, Waller broke a record of 7.28 set by Nikayla Hoyte during the 2015 season. Both times qualify Waller for the 6A State Championship. Her time in the final is also the fastest in the nation this season, according to a statement issued by the team.

Waller, junior Nicole Post and sophomores Mary Gregory and Rhema Konadu finished second in the 4×200 meter relay with a time of 1:45:54, qualifying the team for the state meet.

Junior Isabelle Gulgert won both the 1,000 meters and 1,600 meters race, qualifying her for the Liberty District championship meet.

Senior Sean Casey finished with a region championship qualifying time of 4:30:87. Casey, who is the Liberty Conference cross country champion, also qualified for the region meet in the 1,000-meter race, during which he finished fourth.