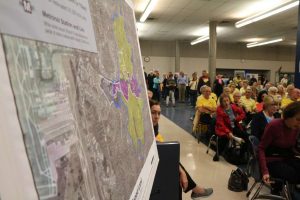 A plan to increase population density in Reston’s Planned Residential Community (PRC) districts will head to the county’s Board of Supervisors in March.

County officials have set dates for upcoming hearings on the zoning ordinance amendment package, which drew fervent opposition during community meetings last year. The zoning change would increase the cap on the population per acre in the PRC from 13 to 16 people.

The amendment could also open up Reston’s village centers to increased major residential development. The proposal would allow the Board of Supervisors to approve developments above 50 residential units per acre within the district’s Transit Station Areas (TSAs) — so long as the projects comply with the area’s master plan that guides development.

The schedule for hearings is as follows:

The hearings are expected to last for several hours. At a late October public meeting at Reston’s South Lakes High School, passionate residents spoke out for roughly two hours against the proposal. The auditorium’s 600+ seats were full, with a solid perimeter of standing audience members as well, plus an overflow room nearby was full of even more people, following along on video.

County officials have said the zoning change implements updates to Reston’s Comprehensive Plan in 2014 and 2015 that calls for targeted, increased growth in Reston Town Center, the village centers and TSAs around the three Metro Stations.