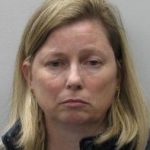 An assistant principal at Hunters Woods Elementary School has been placed on leave after she was arrested for shoplifting at a Target in Reston, according a spokesman for the Fairfax County Public Schools System.

Tochterman left the store with a cart full of unpaid items. Video footage showed she left with $690 worth of merchandise, police said.

This story was updated at 12:33 p.m. to include information on Tochterman’s employment status.