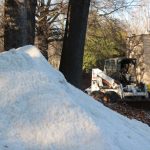 After Sunday’s wet weather, some Restonians are running into another challenge as they begin the week.

Several residents have complained of sheets of black ice on roads on side and neighborhood roads, prompting calls for a delayed school opening earlier this morning.

Based on conditions in your neighborhood, do you think Fairfax County Public Schools should have delayed school this morning? Respond in the poll below.