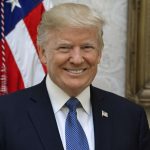 At the roundtable with homeland security officials on Friday, Trump touted his immigration plan, which he said was vital to protect the country’s borders, according to the Associated Press.

He also threatened to cut off aid and sanction countries that refuse to accept nationals deported by the United States, according to the news report.

His administration is seeking billions of dollars for a border wall and major cuts to legal immigration. In return, the administration has proposed plans to create a path to citizenship for people living in the country illegally.

The U.S. Customs and Border Protection National Targeting Center works to catch travelers and detect cargo that threaten security, according to its website.