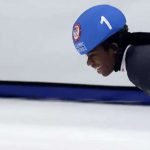 Maame Biney, a Reston teen whose infectious spirit, electric smile and notable speed has grabbed national attention, did not advance in the 500-meter quarterfinal at the Winter Olympics.

At the games earlier this morning, Biney, 18, began with a slow start and was unable to to recover.

But the speedskater’s time to shine in PyeongChang isn’t over. She has another chance to compete in the 1,500-meter race on Saturday at 5 a.m.

Biney’s journey to the United States began when she left her mother in Ghana to join her father. NBC News mapped her story in a video linked below.

She is the first black woman to qualify for the U.S. Olympic speedskating team.