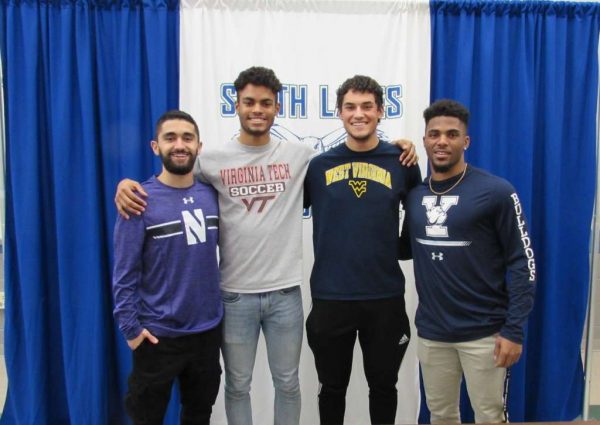 Bardia Kimiavi, a varsity starter throughout his high school career and a three-time captain, will play soccer at Northwestern University. He was named a two-time Virginia State Cup Champion and U.S. Youth Soccer National Champion.

Fellow classmate Kahlil Dover, who we wrote about earlier this month, signed to play soccer for Virginia Tech.

Spencer Alston, a four-year varsity starter on the school’s football and lacrosse teams, will play football for Yale University.  He is a member of the school’s Executive Leadership Council and was selected to attend the 2017 Virginia Boys State Conference at Radford University. He has received individual honors, including conference offensive player of the year and regional offensive player of the year.

Meanwhile, Evan Matthes, a diver and an Eagle Scout, committed to play football for West Virginia University. He received awards like first team all-district punter, first team all-region punter and the player of the year at SLHS last year.