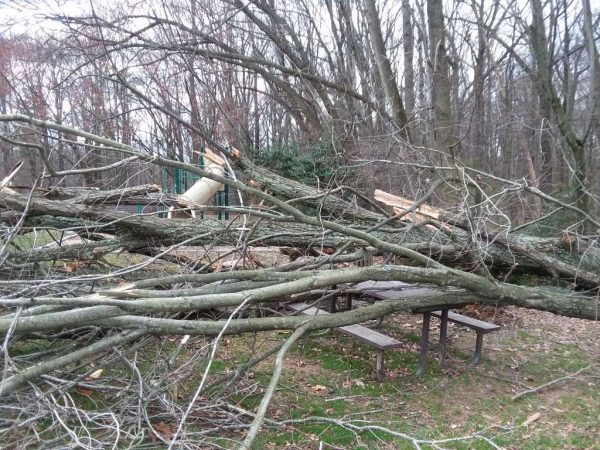 The worst of the windstorm is waning, but Reston Association’s Central Services Facility staff say cleanup on RA’s pathways and common areas could take a minimum of one month.

Staff are focusing on removing trees downed on roadways and pathways and trees hanging or causing safety hazards.

In a release, Reston Association’s director of communications and community engagement wrote the following:

The association is asking members to report any downed trees that pose a safety threat. However, because of the vast amount of damage done by the storm, and the amount of work involved with cleaning up, CSF crews cannot at this time remove trees that are on the ground but do not block roads or pathways and aren’t considered a safety hazard.

Leone told Reston Now most of the cleanup involves down trees. He also said there is fence damage from a downed tree at Glade Tennis Court.

“We continue to closely monitor the situation and are doing emergency tree removal as indicated in the release,” he wrote.