Overall crime in Fairfax County decreased 1.6 percent between 2016 and 2017, according to data released by the Fairfax County Police Department this week.

In a statement, Fairfax County Police Chief Edwin Roessler Jr. said community engagement was critical to the reduction in crime.

“Community engagement, information sharing, accountability and public trust energize our partnerships that keep Fairfax County the safest jurisdiction of its size in the United States,” he said.

Overall in the county, crimes against society, which include offenses related to drugs, gambling, pornography and prostitution, rose by 9.6 percent. Reston saw a 4.2 percent decrease.

Two homicides — the murders of Scott Fricker and Buckley Kuhn-Fricker days before Christmas — occurred in Reston in 2017. 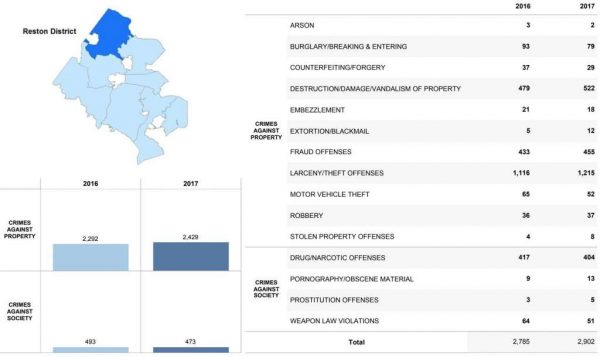