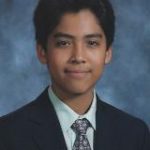 Paz-Suaznabar has performed on From the TOP, an NPR radio show that features gifted young musicians.

He also won first place in the Asian American Music Society Competition and the American Protégé Competition at Carnegie Hall. He attends The Langley School and began playing the piano on his sister’s keyboard when he was two years old.

The event is the product of a partnership between Osher Lifelong Learning Institute at George Mason University and RCC.  All ages are welcome to the free event.