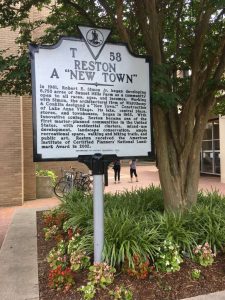 Reston received a lot of press attention back during its initial development stages, but what really helped attract people to live and work in Reston was the marketing, said local graphic designer Chris Rooney.

The Reston-centric advertisements of yore primarily ran in The Washington Post and the now-defunct Washington Evening Star.

“These ads first appeared at the genesis of Reston when it was being developed,” said Rooney. “Without these ads, I don’t think that Reston would become what it is today, attracting people here today and making it what it is now.”

Rooney will conduct an event at the Reston Community Center next Thursday (May 10) at 7 p.m., entitled “Reston Hears Voices: The Marketing of a New Town.” The event will focus on how the town defined itself through marketing and advertising from the early 1960s through the first 10 years of Reston’s existence.

Over 70 newspaper advertisements have been collected for the event, all spanning the time from when construction on Reston’s first village center started to when the town reached a population of 10,000.

The event will probably offer “things that the audience hasn’t really seen before,” said Alexandra Campbell, the Reston Historic Trust’s executive director. “So that certainly will be a nice aspect to it.”

Photo via the Reston Historic Trust