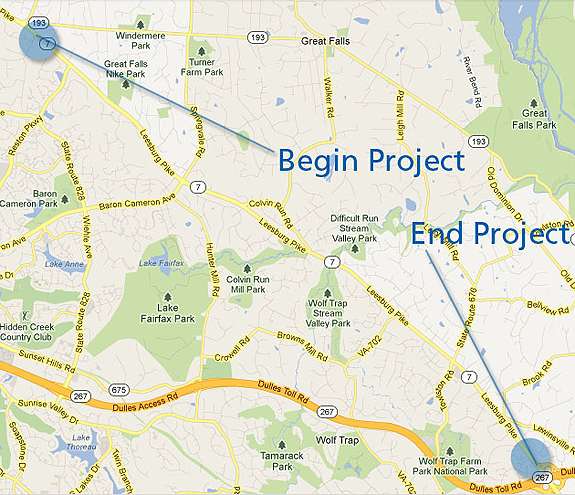 An additional $40 million is being sought to begin widening a seven-mile stretch of Route 7 between Reston Avenue and Jarrett Valley Drive.

State officials’ estimates of the overall $278 million project came in $95 million above the amount originally anticipated by the proposal. The project has been bid and is ready for construction, pending the approval of additional funding.

The Fairfax County Board of Supervisors will consider approving funding at their June 19 meeting.

Once the funding gap has been bridged, construction will begin to widen Route 7 from four to six lanes with intersection improvements and the addition of a shared-use path on both sides of the roadway. County and state officials said the project is necessary to reduce congestion, improve safety and boost mobility for bicyclists and pedestrians.

Officials said the project came in nearly $1 million above estimates due to the competitive market generated by ongoing construction in Northern Virginia, several challenging utility relocations (including a $200 million upgrade project by Washington Gas) and the more than 230 property transactions required to ensure right-of-way.

The county is considering pitching in $23 million in funding that was not previously allocated by the board. Dollars will be drawn from the following project:  Route 123’s widening ($13 million), Frying Pan road widening ($3 million) and a park and ride expansion at the Lorton VRE ($690,470). The Virginia Department of Transportation will provide up to $40 million in state funding.

More Stories
This Weekend: Taste of Reston Food Festival Returns to Reston Town CenterTrack Work to Cause Delays on the Silver, Orange and Blue Lines This Weekend