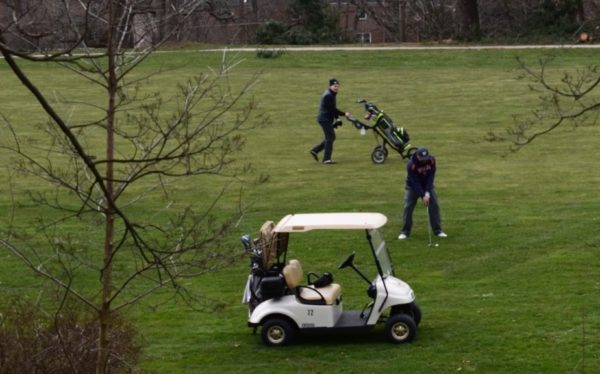 This is an op/ed submitted by the North Course Committee of Rescue Reston. It does not reflect the opinions of Reston Now. To submit opinion pieces, email [email protected].

Wheelock Communities bought Hidden Creek Country Club in October 2017. Hidden Creek is zoned as a golf course and is intended in the Reston Master Plan to remain a golf course in order to provide planned, open green space as a balance to the high-density development currently occurring in Reston Town Center and near Metro.

This innovative way to combat suburban sprawl has always been the Reston planned-community deal: protected open space to balance out high-density living. And Restonians were told they could count on this deal.

Yet, from the start of its interactions this year with the Reston community, Wheelock Communities has claimed that Hidden Creek is economically unviable as a golf course. Why did Wheelock buy it then?

Wheelock cannot be arguing that golf courses are inherently commercially unviable because it owns two large properties in Texas that include golf courses. There’s no reporting that Wheelock intends to close those courses.

Plus, Reston is an outdoor-oriented community that looks to enjoy the great outdoors right here, as summed up in Reston’s “Live-Work-Play” slogan. Outdoor activities sponsored by the Reston Association and by the Lake Anne and Reston Town Center merchants’ associations are well attended.

Despite what looks to be favorable conditions for generating more demand for golf among Restonians, Wheelock has not been exploring this opportunity in its interactions thus far with the Reston community. Instead, Wheelock has been gauging how much housing the community might tolerate on what is now the Hidden Creek Golf Course.

Could it be that Wheelock is looking to neglect the golf course and let it commercially fail in order to boost its argument for a rezoning request?

It’s easy to see why Wheelock would want to renege on its commitment to honor Hidden Creek’s zoning as a golf course. According to the Fairfax County Tax Administration website, Wheelock paid $63.75 million for a mere 12.3691 acres in the adjacent Charter Oak Apartments, or $5.15 million per acre. Charter Oak Apartments commanded this high acreage price because the land is zoned as residential (for apartments), is developed, and can be redeveloped as housing.

Yet Wheelock paid only $14 million for the 162.5835 adjacent acres of Hidden Creek Country Club, or less than $100,000 per acre, according to the same Tax Administration website. That’s right: an acre on the golf course was one-fiftieth the price of an acre in the apartment complex next door. This dramatically lower price per acre for Hidden Creek is precisely because the golf course is not eligible for development (beyond the parts that already have buildings).

If Wheelock could get Hidden Creek rezoned for housing, the value of the land would skyrocket, giving Wheelock a huge windfall. And in the process, Restonians would lose their precious green open space that they were told was guaranteed by the Reston Master Plan.

Could it be that Wheelock never intended to honor its commitment under the zoning plan to keep Hidden Creek as a golf course? From where we sit, it sure looks like it.