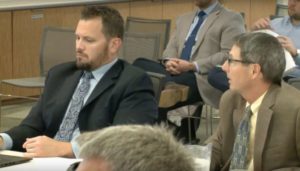 In a preliminary dive into next year’s budget on Monday, Reston Association’s Board of Directors and members of its fiscal committee explored ways to navigate a possible increase in assessments next year.

The increase may be necessary to offset additional expenses and new capital projects, according to RA officials. A major driver of expenses is a $50,000 increase in health insurance premiums for staff and $215,000 to pay for unanticipated lease payments for the lease of RA’s headquarters. Although staff hiring savings of $90,000 are expected to offset some expenses, the association has also seen an increase in lawsuits, amounting to roughly $30,000. Revenues from the Lake House and tennis courts are also down, said Larry Butler, RA’s Acting CEO.

Other expenses include a $60,000 state-mandated reserve study,  $40,000 in software updates, $44,000 to add dechlorination systems for pools, $30,000 for a new billing and collections software and $20,000 for targeted marketing. The dredged of Lake Audubon, which was pushed from this year to next year, is expected to cost $850,000. Projected cost estimates for improvements to Hook Road are also expected to be a major expense next year.

Butler pitched several budgeting strategies for next year’s budget. On the top of the list is a proposed 2.5 percent in membership dues or annual RA assessments. Other alternatives include cutting expenses by 2.5 percent, dipping into investment earnings for $35,000, and the use of RA’s operating reserves.

RA Board President Andy Sigle suggested that staff continue to explore ways to balance the budget with RA’s operating reserve, which was also used to pay the Lake House loan. A stronger understanding of the projected year-end balance for the operating fund was necessary to determine whether or not to increase assessments, Sigle said.

Board member Julie Bitzer also stressed the need to ensure budgeted amounts are conservative and realistic, citing that RA budgeting for a decrease in lease payments for its headquarters location, only to later discover a decrease was not expected.

RA staff and the board will take a  second dive into the budget by presenting draft two of the budget in late September. Following a series of listening sessions with members, the fiscal committee will receive the budget in late October. The budget is approved at a November meeting by the board following additional member input opportunities and amendments.

More Stories
Pet of the Week: SunbeamSaturday: Take Your Dog for a Swim