Mile 20 (781 Station Street) will offer 24 taps and bottle beers for customers to try. The business, which is part of The Breeze, is located in the lower level of the restaurant in the patio area — space formerly occupied by a hair salon. 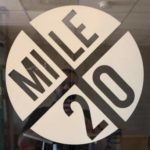 The owners had the following to say about their new venture, which offers many beers from local breweries like “Optimal Wit” from Port City Brewing in Alexandria and “Choosy Mother Peanut Butter Porter” from Isley Brewing Company in Richmond.

Mile 20 is taking a step back from all the beer that you can get at anywhere. American light lagers are not what we are about. We are about supporting local and small breweries. There are amazing beers in your backyard, and you shouldn’t have to go far to find all of them. Mile 20 has 24 taps and dozens of bottle beers for you to try. Rotation is key so there is always something new and interesting. Whether your thing is IPAs, Sours, Porters, or anything in between; we got you covered. If you are new to the craft beer world, come on in and try a flight; specially picked out by our knowledgeable bartenders or build your own.