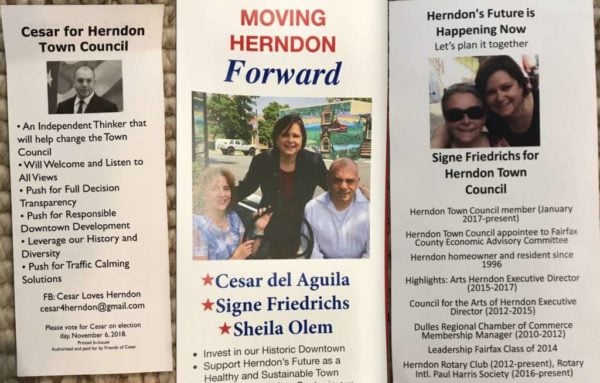 Herndon Town Councilmember Grace Wolf Cunningham is facing a civil suit filed by a trio of candidates, including two current councilmembers, who allege Cunningham, also a council candidate, engaged in malicious prosecution over the summer.

All three complaints were unanimously dismissed by the Virginia State Board of Elections on Sept. 20. Four days after the decision, which took about a minute-and-a-half to reach, the candidates filed the civil suit against Cunningham.

In an email to Reston Now, Cunningham, who has served on the Town Council since 2010, said there was not much to comment on because the matter is ongoing litigation. A motion by her attorney to dismiss the case was denied earlier today.

John Farrell, the plaintiff’s attorney, said a decision on the case is pending and subpoenas to six of Cunningham’s “allies,” including Town of Herndon Mayor Lisa Merkel, have been delivered.

“We believe this was a concerted effort and that there are documents that she sent them that prove that she was filing her case for malicious reasons,” Farrell said.

The state’s elections board found all of Cunningham’s complaints were unfounded.

The complaint filed by the trio goes on to say that Cunningham sought to damage the other candidates’ electoral prospects by “subjecting them to unfounded allegations of campaign advertisement violations, and by forcing them to defend themselves at a public hearing before the Virginia State Board of Elections.”

That process damaged the candidates public standing and threatened their electoral prospects, according to the complaint. It also states that Cunningham was “willful, wanton, and malicious, in the sense of acting with ill will, malevolence, grudge, spite, wicked intention, and a conscious disregard for Plaintiffs’ rights.”

Descriptions of the dismissed complaints filed by Cunningham are below and were obtained by Reston Now:

“Cesar Del Aguila is a candidate for Town Council in the Town of Herndon and running in the Nov 6th General Election. His affiliates have been doorknocking and handing out his campaign literature that is allegedly paid for and authorized by “Friends of Cesar” – there is no campaign committee of that name in the entire state,

No identification of whose campaign committee paid for and authorized this palm card [by Signe for Herndon]”.

Photo via Virginia Department of Elections