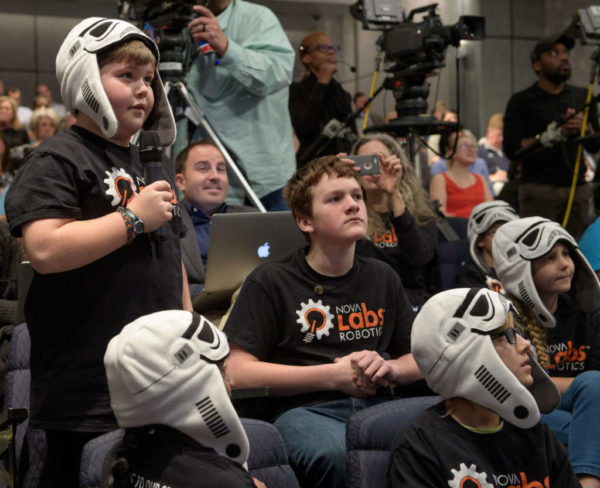 (Updated 3 p.m.) Gabe Aparicio, a 9-year-old Reston student, has been working on a project that involved 3D printing for space technology and had some questions. So who better to ask than a board of NASA experts?

A photo of Aparicio asking a question at a Nov. 29 meeting regarding commercial space traffic was NASA’s featured “Photo of the Day”.

“It was a really great opportunity to hear about the technology he only normally sees in movies,” said Sam Aparicio, Gabe’s father.  “It was quite a treat.”

Aparicio is a member of the “BrainStorm Troopers”, a team of students at the Nova Lab Robotics in Reston. The labs are a maker space in Isaac Newton Square that, among other activities, runs programs that help children learn about science and technology.

Laura Carey, one of the co-coaches for the team, said the name was chosen by the avid Star Wars fans in the group.

The BrainStorm Troopers are one of the Nova Lab Robotics teams working in the FIRST Lego League, a challenge for students ages 9-11 built around designing robotics with legos to combat a certain challenge. This year, BrainStorm Troopers’ challenge was called Into Orbit, tasking students with identifying challenges humans would face in deep space exploration and work on devising a solution.

“They use the Legos to build robots,” said Marybeth Haneline, President of Nova Labs. “For their research question they looked at 3D printing in space, so [Gabe] asked NASA about 3D printing.”

Haneline said students at Nova Labs Robotics were some of several teams throughout the region invited to NASA’s discussion of delivery of commercial payloads to the moon’s surface.

“They have been working all season long to understand what is the role of 3D printing in space exploration,” said Sam Aparicio. “It was really cool for him and his teammates to get validation that this is an area of great interest for NASA engineers. That was one of the highlights of the event.”

Sam Aparicio said Gabe’s involvement with BrainTroopers has not only been fun for a child who loves building with Legos but has also helped shape skills outside of science and technology.

“I’ve been enjoying seeing how this can translate into real-world problem solving,” said Sam Aparicio. “I think one of the big things, not just my son but all of the kids, is that they love learning about teamwork. In the school setting, harder for all of the kids to work on one problem… It’s just been fun for them to bond with other kids in trying to solve a big problem.”

Haneline said the Nova Labs Robotics teams are sponsored, in part, by donor corporations like BTI360 and the American Institute of Aeronautics and Astronautics.

Haneline noted that Nova Labs Robotics is currently in a dedicated space in Isaac Newton Square, which is soon to be redeveloped, so the group needs to find a new home by the first of the next year.

“We’re looking for a corporate donor who might be willing to donate some space,” said Haneline.