Updated 11:20 — The Ping-Pong Tables were removed, from the project and the story.

Construction on new upgrades for the South Lakes Village Center could be coming next year.

The upgrades proposed by the Chevy Chase Land Company were approved by the Reston Association Design Review Board in June. Plans include upgrades like an amphitheater and a fire pit. 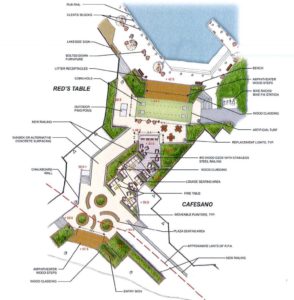 The upgrades are planned to help turn the aging commercial center into a local destination, though earlier this year residents nearby said they were concerned that the upgrades could lead to increased noise levels and vandalism.

Idrissa Sesay, assistant property manager of South Lakes Village Center, told Reston Now in an email that the company is still working on a construction timeline.

According to the Design Review Board’s approval, the upgrades would add also add a bicycle rack and a bike repair station to make the area more bike accessible.

Photos via Chevy Chase Land Company
This story has been updated

END_OF_DOCUMENT_TOKEN_TO_BE_REPLACED

More Stories
Pet of the Week: DieselCounty Board of Supervisors Approves Several Developments