The Fairfax County Department of Transportation (FCDOT) is gearing up to study parking management options, which could add paid parking in Reston and Tysons.

FCDOT hopes to hire a professional parking consultant to explore parking management, which FCDOT says would fulfill the vision of the Comprehensive Plan for each area. 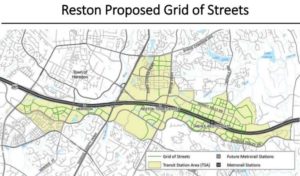 The other option is time restricted parking, which can limit parking during certain times of the days or set a certain allotted time for each car. While FCDOT expects the second option would pose more enforcement challenges, license plate readers, street cameras and space occupancy sensors can assist with policing the parking.

McCartney highlighted one potential challenge: designing a parking plan that does not push cars into nearby neighborhoods with free parking. “That’s a scenario we want to avoid,” she said.

With the project in its “preliminary stages,” McCartney said the study — which FCDOT estimates will cost $100,000 — will help figure out what the projected revenue could be from paid parking and citations from parking tickets.

“I’m sure there will be interest in what kind of money it makes,” Providence District Supervisor Linda Smyth said at the meeting. “We need to keep that in mind.”

Some of the supervisors raised concerns about the proposal.

Braddock District Supervisor John Cook cautioned against spending the money on the study without a “functional purpose we are clearly stating.” 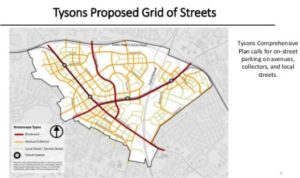 “We need to be clear about why we want to do this,” he said, noting that urban areas may need parking management. “I don’t think you get the consultant to come up with the reason.”

“It does have an impact on businesses,” Herrity said, adding that he supports hiring a consultant to conduct the study. “You have some good ideas in here.”

Hunter Mill District Supervisor Cathy Hudgins responded by saying that the “problem in Reston” stemmed from unclear goals. “I think the mistakes that were made in the past can be a helpful learning process,” she said.

She stressed that the purpose of the “needed proposal” should not focus on collecting money, but instead on helping transportation in an urban setting, especially Tysons.

FCDOT plans to update and consult with the board as the process continues.

While the plan does not have a timeline yet, McCartney said FCDOT “would move fairly quickly” to hire a consultant for the study acquires funding.

After board approval, FCDOT would work with stakeholders — the Office of County Attorney, Fairfax County Police Department, the Office of Community Revitalization, the Department of Planning and Zoning, Land Development Services and others. Together, they would update ordinances, set meter rates, select vendors and begin outreach efforts to businesses and the community.

“The last thing you want is employees and Metro riders parking on the street during the day, but short term-term customers don’t have a place to park,” the board’s Chairman Sharon Bulova said. “I think we’re doing the right thing starting out with a study.”

The County is looking at parking management, including paid parking, on grid streets in Tysons & Reston. I urged the Board to proceed very cautiously & reminded them of the Reston paid parking fiasco that resulted in a lot of angst & loss of business. Much more to come. pic.twitter.com/A8olM6KCrl

END_OF_DOCUMENT_TOKEN_TO_BE_REPLACED

More Stories
Del. Ken Plum: What is Your Opinion?Pet of the Week: Buster