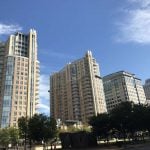 We’re counting down the top 15 most-read articles of 2018 this week. Here’s the final list of our top five stories.

3. A story about a car that crashed into the Trader Joe’s on Killingsworth Avenue in January garnered 13,760 pageviews. The building’s bricks sustained some damage. No injuries were reported.

2. A roundup of the businesses that left Reston Town Center this year brought in 13,942 pageviews. While a handful of places opened in RTC in 2018, nearly twice as many closed, with several small shops pointing to paid parking as a reason driving the closures.

1. The top story of the year — at 16,511 pageviews — was about a 71-year-old woman who died after getting hit by a car at the intersection of Reston Parkway and Bluemont Way. According to passersby, a mangled baby stroller was visible at the location of the incident.

It’s been quite a year, and we look forward to bringing you more stories in 2019.

More Stories
Feeling Outdoorsy? Consider Starting the New Year Off With a HikeHere’s Where to Celebrate New Year’s Around Reston