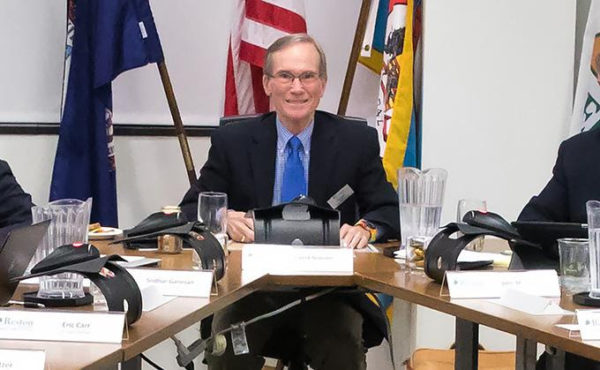 (Updated at 9:30 a.m. on Jan. 14) The Reston Association is honoring the memory of David Bobzien, a former president of the RA who succumbed to cancer in December.

Sigle highlighted Bobzien’s service to the Reston community. “Much of his time was spent volunteering, be it for his church, Reston Runners, the Reston Triathlon or for the legal community in Virginia,” Sigle said. “His time on the RA board really showed what a professional David was and that whatever he chose to pursue he did it passionately and diligently.”

After serving as a captain in the U.S. Army Judge Advocate General’s Corps at Fort Meade, Md. for four years, Bobzien became an associate with Fitzgerald and Smith in Fairfax, Va. He then served as assistant counsel in the Department of Justice’s Office of Professional Responsibility from 1979 until 1992.

He also served as a Virginia State Bar Delegate to the American Bar Association’s House of Delegates, on the ABA Commission on Domestic and Sexual Violence and as chairman of the Virginia Law Foundation’s Virginia CLE Committee.

In June of 2016, he retired after 23 years as the county attorney for Fairfax.

Bobzien was first elected to serve a three-year term as the RA apartment owners’ representative in 2017 before accepting the role as president. In May last year, he resigned from his position as RA president after revealing he has recently been diagnosed with cancer.

“My hope is to get through this so that I can continue to enjoy the people and pathways that [my wife] Cathy and I fell in love with when we moved to Reston in 1975,” Bobzien said at the time of his resignation, the newsletter wrote, adding that he publicly revealed the nature of his illness so that he might help others in similar situations.

Bobzien died at the age of 72 on Dec. 30 at The Johns Hopkins Hospital after battling leukemia, according to his obituary.

He is survived by his wife, two sons, a daughter-in-law, three grandsons, a granddaughter, a sister-in-law, niece and four nephews.

A memorial mass will be held on Friday, Feb. 8, at St. John Neumann Catholic Community (11900 Lawyers Road). The family will receive friends at the church from 10 a.m. to 11 a.m. prior to the mass and reception in the church hall. Interment at Arlington National Cemetery will happen at a later date.

In lieu of flowers, the family asks that donations be made in Bobzien’s name to either the Fairfax Law Foundation or the Virginia Law Foundation.