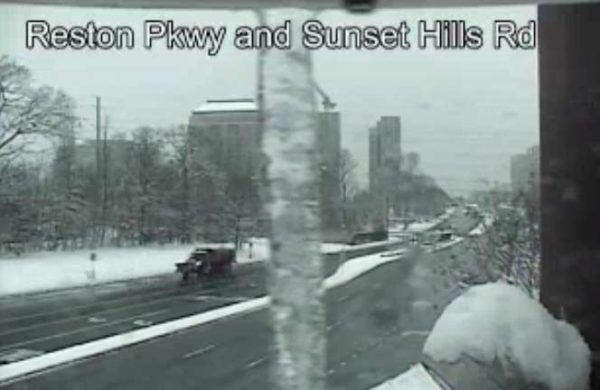 Update at 5:35 p.m. — Treacherous conditions have been reported on local roads as steady snow continues to fall.

The sun has gone down and the moon has come up… temps and visibility are continuing to drop. Pls stay off the roads tonight, but plan now for your commute tmrw. Telework or delay trips until the sun rises and temperatures increase. Roads will be slippery. #safetyalways pic.twitter.com/QKvP9byVc7

All Fairfax County public schools will be closed Mon. Jan. 14, 2019, due to the snow and hazardous travel conditions. School offices and central offices will open 2 hours late, to be opened by 10:00 a.m. (Cond 5) with an unscheduled leave policy in effect for 12-month employees.

Earlier: Snow is still falling on Reston, which has seen more than 7 inches of accumulation in what is now the snowiest D.C. area storm since 2016.

Another inch or two is possible before the storm winds down tonight, forecasters say.

VDOT crews have been working hard to clear roads throughout Fairfax County, but officials are still urging residents to stay home due to slick conditions.

Earlier this afternoon Virginia State Police said troopers in its Fairfax Division have responded to 34 crashes and 52 disabled vehicles since midnight. Statewide, more than 230 crashes were handled by VSP during that timeframe.

“Drivers be advised — looks can be and are deceiving!” state police said. “Highways may appear to be clear, but slick and icy conditions still exist.”

“On the second day of winter weather across northern Virginia, drivers are asked to continue to avoid unnecessary travel for crews to safely clear accumulating snow,” VDOT urged.

Two important things to remember if you must travel:
1) make sure you've removed all the snow from your windows so you can see (and don't forget the snow on top of your car, too!)
2) use your headlights so others can see you

More scenes from around Reston and Herndon, via social media:

10:30 am in Reston. The lake is partially frozen over, and the snow is still falling lightly. ⁦⁦@capitalweather⁩ pic.twitter.com/cTevUHGFvE

First snow of the year! Thank you @RestonOnline for clearing the paths! ⛄️ #Reston #snurlough pic.twitter.com/7h3Qp9Y2ji