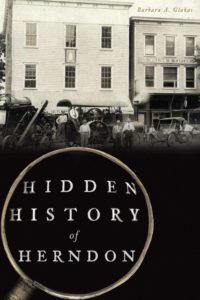 Herndon is well known as a sleepy farming community with growing development working its way west from Reston, but a new book takes aim at some of the bizarre stories from the town’s history.

“Hidden History of Herndon,” part of the Hidden History series from publisher The History Press, is scheduled to be released on March 11 in paperback.

The book’s author, Barbara Glakas, is the historian of the Herndon Historical Society. Glakas is a native of Fairfax County and a retired teacher from Fairfax County Public Schools.

The book includes tales from the town’s naming by a mysterious stranger to local unrest in the 1920s. According to the Amazon description:

A mysterious stranger who passed through the village one night suggested the name Herndon, after the captain of a sunken ship. The Civil War split loyalties among the townspeople and brought an unexpected Confederate raid on the town. Prohibition brought bootleggers with it, but its repeal caused an uproar from temperance-minded residents. Lively community fairs were ever present in the 1920s, but so was the Ku Klux Klan. Local author Barbara Glakas uses rare photographs and firsthand accounts to tell little-known stories of the people, places and events that shaped the history of the Town of Herndon.

The book was mentioned by the Herndon Town Council in a Jan. 15 session during a recognition of the town’s 140th anniversary.

Photo via The History Press