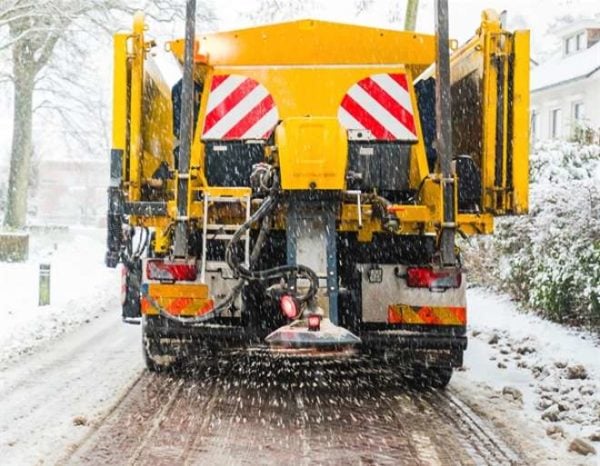 Road salt may have a hand in the recent spikes of chloride concentrations in Reston streams, along with a slew of environmental issues.

Britt wrote that measurements of the chloride concentrations at the two sites were taken before this year’s first storm and then again after road salting for the first two snowstorms. He found that the chloride concentrations at both sites increased fourfold from the first measurement, which he said was within the normal range for North American streams.

The monitoring efforts were a part of a larger program initiated by the Izaak Walton League of America to encourage “citizen scientists” to examine local streams before and after road salting.

Britt, a Virginia Master Naturalist member, wrote that higher chloride concentrations in lakes and ponds can halt the bottom and top waters from mixing, which then leads to less oxygen in deeper areas. Too much chloride can reach toxic levels for aquatic life.

“Although there are a number of alternative de-icing agents available, sodium chloride as a brine solution appears to have the least negative environmental impact when considering the full life cycle of its production and application,” the report says. “Sodium chloride, nevertheless, can generate a host of environmental problems.”

Britt’s report analyzed several of those impacts, which included:

Britt says that these environmental concerns aren’t unique to Reston.

“Chloride concentrations in Fairfax County surface waters have steadily increased for the past 25 years, consistent with the use of de-icing agents,” Britt wrote.

Britt ended his report on information about the next step: action.

The Virginia Department of Environmental Quality is currently developing a Salt Management Strategy planning process aimed at keeping chloride levels below the amount that starts to ruin the water, the report says.

The department also had had in a 2018 report included suggested options to optimize de-icing agents and the way they are applied to reduce environmental impacts, Britt wrote.

“Meanwhile, as individuals and business owners we should be cognizant of the potential environmental impacts associated with the application of de-icing agents,” Britt wrote, adding that it is important to balance public safety with environmental damage.