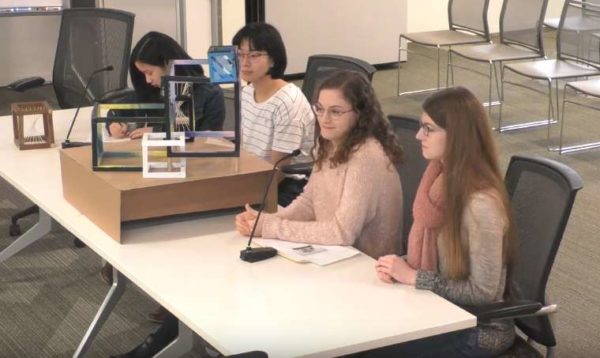 Four female students from the club described the plans for the sculpture, which would be roughly 10 feet tall and be located by Lake Thoreau, along with showing the board a small model.

The artwork is meant to explore the idea of people’s originality by using various sizes of cubes to represent individuals and how they interact with each other. Color on the inside of the cubes represents each person’s genuineness, while the black facade symbolizes masks that people put on in society, the students said.

For building materials, the teens said that they want to repurpose wooden beams from a sculpture from a few years ago for the cubes. The students said the design may also need an airplane cable for wire, galvanized metal poles for the stilts that the largest cube rests on, large panels of frosted strataglass and light projection onto the panels.

The students said they are still considering the color scheme, having wires criss-cross within the cubes and adding a kinetic element via sails made with wire and nylon in the boxes.

Richard Newlon, the board’s chairman, said that this design was stronger than last year’s project because it keeps a “dynamic quality” as people circle the sculpture.

Newlon and several other board members debated the placement of the sculpture’s little cube on top. 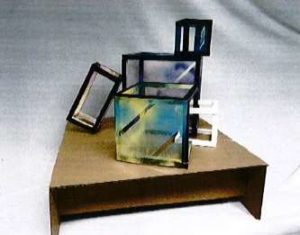 “The little box on top — you need to really think about that and where is that box going to go,” Newlon said. “It looks like an afterthought at the rear like it is. Maybe it needs to be a little bit more prominent somewhere.”

The students said that they also had two alternative ideas for where the small cube on top could go — including one where the cube is placed at the base of the sculpture. Ultimately, though, they stressed that they want to sculpture to have a motion of rising up instead of heavy cubes on the ground.

“I love it and I definitely love the cube on top,” Land Planner and Landscape Architect Member Grace Peters told the students.

The board members also had other design input.

Peters added that she wasn’t sure if the sculpture would need lights projected onto it, but does like the incorporation of color in the design.

Member Charlie Hoffman said he wanted more from the sign. “The sign along the path was kind of small and pathetic and not really noticeable,” Hoffman said. “Is there a chance to get one that is more of an eye-catcher?” 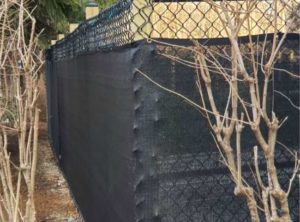 After the South Lakes High School students, the board granted an appeal by a male resident who lives across by the Primrose School of Reston (1309 N. Village Road) to reconsider the school’s fencing.

Several members of the board agreed with the assertion that the fencing looks like temporary screening for construction sites.

W. Neal Roseberry, the board’s vice chair and architect member, said that he wants the school to provide green or black full weave at the full height of the fence with slats through the chain link. “I don’t think what’s been installed rises to the level of workmanship suggested in the design guidelines.”

The resident also wanted to challenge a red plastic fire truck in the playground, arguing that both the fence and the fire truck do not fit in with the natural environment and residential area. The board did not take up the fire truck appeal.