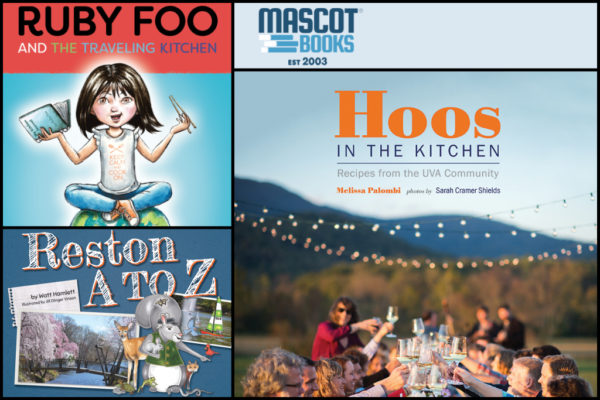 Looking for some reading suggestions? Mascot Books has some recommendations for books by local authors.

The full-service hybrid book publishing company (620 Herndon Parkway #320) started in 2003 with a self-published book about a collegiate mascot. Since then, it has published more than 2,500 fiction, nonfiction, children’s and cookbooks since then, according to its website.

Reston Now asked Mascot Books to share some favorite books about Reston or written by local authors. Here’s what the staff recommended, along with reasons for why they are worth reading.

“Ruby Foo and the Traveling Kitchen: Finding the Foo Identity” by Tiffany Foo

Description: Ruby Foo may seem like your middle schooler, but in the kitchen, she turns into a culinary superhero called the Fantastic Foo! When a mysterious photograph leads her out of her own kitchen and into her grandfather’s, she must use her culinary skill and courage to uncover some long-hidden secrets about her family’s storied past.

Why we love it: Part history, part culinary adventure (and including several kid-friendly recipes!), “Ruby Foo” is perfect for chefs of all ages — she is as smart as she is fearless and is a great role model for middle school-age kids. Tiffany Foo is a Herndon resident.

“Reston A to Z” by Watt Hamlett

Description: “Reston A to Z” takes young readers on a tour of America’s first modern planned community. Guided by Robert E. “Bob” Squirrel (reminiscent of Reston’s beloved founder, Robert E. Simon), readers will undoubtedly recognize the town’s many landmarks in the photos of the places, activities and nature that make Reston a treasure to families.

Why we love it: Reston was one of the first planned communities in the state, and “Reston A to Z” does a great job not just showing off the local sites, but also talking about the history of this great town. We particularly love the piece about the town center — it’s amazing to see how it’s changed! Hamlett is a Reston resident.

“Hoos in the Kitchen” by Melissa Palombi

Description: Inspired by the flourishing food scene and endless pride of the University of Virginia, “Hoos in the Kitchen” features more than sixty recipes from members of the UVA community. This collection is perfect for UVA fans everywhere, with recipes designed to incorporate Virginia-based ingredients to those of international origins.

Why we love it: Melissa grew up in Reston and moved to Charlottesville to work for the University of Virginia. Hoos in the Kitchen does a great job of showing the local culture and community through food. We’d love to see a “Reston Kitchen” cookbook one day, too! Palombi was raised in Reston.