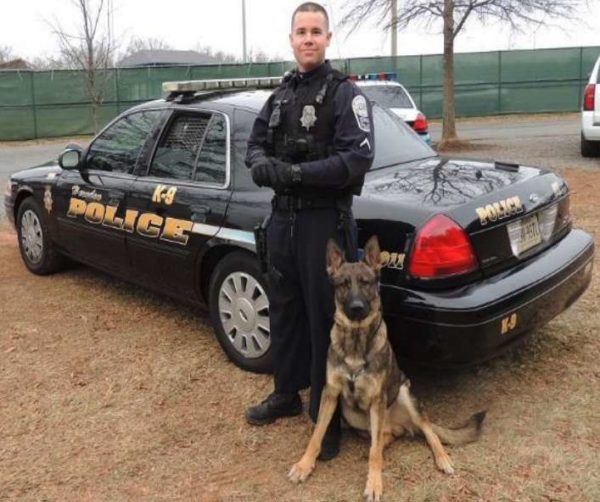 After two years on the force, Leon recently retired from his police dog duties at the Herndon Police Department.

The 4-year-old German Shepherd was diagnosed with advanced stages of an undetermined form of cancer, a spokeswoman for the Town of Herndon told Reston Now. 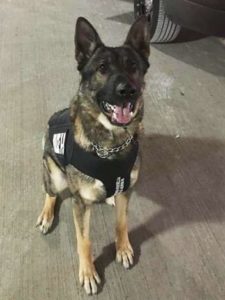 Leon graduated from the Fairfax County K9 School in late December 2016. He was trained in tracking and narcotics detection.

In 2017, Leon received his ballistic vests from the nonprofit Vested Interest in K9s, which provides vests for police dogs in honor of fallen K9s.

Officer Trent Ashman, Leon’s handler and partner, told Reston Now that Leon has been deployed to the field 125 times since his 2016 graduation. Leon helped police discover and seize narcotics and weapons 49 different times, he added.

During his time at the police department, Leon aided with nine criminal apprehensions, Ashman said.

A highlight was when Leon tracked and found two suspects in a stolen vehicle case who were hiding in a creek miles away. “The stolen gun used in the crime was also located approximately 20 yards away from where the suspects were taken into custody,” Ashman said.

Leon officially retired on Feb. 22. “He will remain comfortably at home surrounded by his family,” the Herndon Police Department tweeted. “Thank you for your service, Leon. You’re a good boy.”

It is with a heavy heart that we announce the retirement of #K9 Leon for medical reasons. He will remain comfortably at home surrounded by his family, including his handler and partner, PFC Ashman. Thank you for your service, Leon. You're a good boy. #herndonpd pic.twitter.com/yVt9mqsqPt