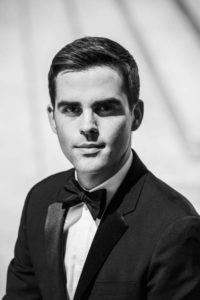 Luke Frazier, a pianist and founder of the American Pops Orchestra, is set to take part in a program featuring the music of Irving Berlin tomorrow (April 11) at CenterStage (2310 Colts Neck Road).

The program, which is part of CenterStage’s “Meet the Artists” series, will also feature other musicians. The event is made possible through a partnership between Osher Lifelong Learning Institute at George Mason University and Reston Community Center.

Berlin was an American composer and lyricist who produced ballads, dance numbers, novelty tunes and love songs. His work forms a major part of the Great American Songbook.