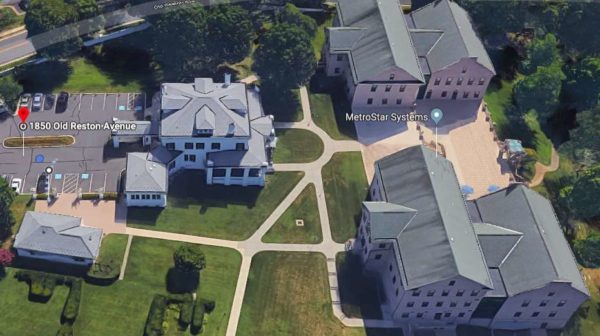 The redevelopment project, which is located at 1856 Old Reston Avenue, is guided by the principles of “strength, dedication and permanence,” according to an application by the developer. The 5.2-acre site is also home to the historic A. Smith Bowman Manor House, which was built in 1899 and is listed on the Fairfax County Inventory of Historic Sites.

The proposal by AP Reston Campus LLC, a subsidiary of the American Armed Forces Mutual Aid Association, is in its early stages. The county accepted the application for review earlier this month.  AAFMAA bought the property in 2009 and has occupied it since 2010.

“Rather than continuing to invest in a 30 year old building, AAFMA anticipates a greater return on its investment by meeting market demand for modern, iconic, campus-oriented office buildings in close proximity to Reston Town Center,” according to the Feb. 19 application.

The company will preserve the manor house, a gazebo, pond and wall along Old Reston Avenue. A new landscaped garden is proposed behind the manor house.

AAFMA said it is working with DBI Architects, Inc. to create a “innovative, sustainable, cutting -edge architectural statement along Old Reston Avenue,” according to the application. It hopes the new campus setting is an attractive backdrop to the Manor House.

The latest plan departs from the previously approved Boxwoods project, which would have brought 60 residential units to the site and converted the Manor House into a six-room hotel. The developer dropped those plans in 2009 to continue using existing office space on the site.

The Reston Planning and Zoning Committee will review the project tonight.

A legal representative for AAFMAA did not return a request for comment. A map of the proposed location is below.