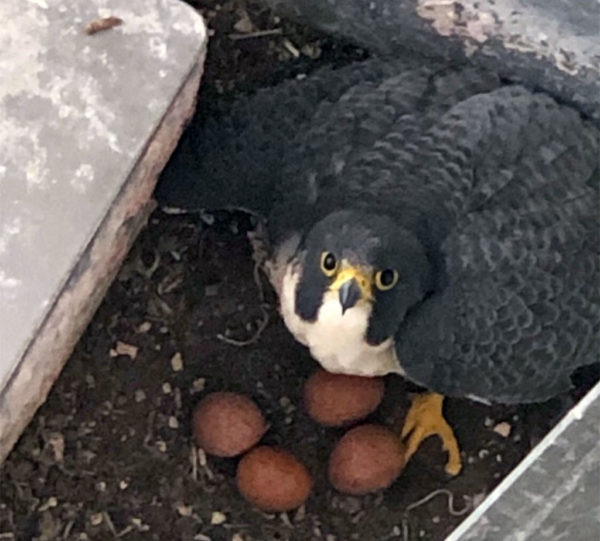 The following is a statement from Scott Brodbeck, founder and CEO of Local News Now, the Northern Virginia-based online publishing company behind Reston Now.

Yesterday, Reston Now announced the results of its poll to help name the two peregrine falcons that were found nesting at Reston Town Center.

Most of the announcement was devoted to rehashing the paid parking fiasco at the Town Center, because the top vote-getter in the poll, by far, was the names “Free” and “Parking.”

In the end, however, I made the call to select the runners up — Robert and Anne (as in Robert E. Simon and Lake Anne) — as the “official” names of the falcons. I felt the falcons deserved better than to be named after an acrimonious local parking dispute, and as a relatively new parent I did not think it fair for adults to ruin what could have been something fun for kids to participate in and learn from.

As we said, to the extent we have the power to decide such things, “Free” and “Parking” can be the birds’ unofficial nickname and considered the “People’s Choice” option.

The reaction to the announcement was disappointing. While we expected some push-back, and would understand some mild frustration, the cursing and threats of boycotts posted by some on Facebook were uncalled for. This was intended to be a light-hearted contest to name a couple of falcons, and instead the result has grown adults cursing and becoming angry.

It was reminiscent of the UK’s “Boaty McBoatface” kerfuffle, with more unironic invective.

Let’s set a few things straight about how this all came about. Boston Properties and its PR reps approached Reston Now with the idea of running a naming contest for the falcons that had been nesting at RTC. We agreed — I made the decision to move forward — because it sounded fun for readers.

Despite some wording about working with Boston Properties on it, we ran the contest on our own and made our own decisions, like including “Free” and “Parking” in the final poll. RTC’s owner let us know that they did not like “Free” and “Parking” as names, but we moved forward anyhow. Finally, when push came to shove, I made the decision to pick the second-place names — which were, let’s be honest about it, better names — over the first-place novelty names.

To be clear, there was no money or favors that changed hands as a result of this contest, it was done informally and for fun. Boston Properties is not a current Reston Now advertiser and its only recent ad purchase from us was a sponsored post that was published in March 2017. We have also not recently solicited advertising from Boston Properties or Reston Town Center.

The fact that we now have Boston Properties upset at us, for including “Free” and “Parking” in the poll to begin with, and readers angry at us for not selecting those names as the official winner, is frustrating to say the least. But life — and the news — goes on. Hopefully this statement clears some things up.

More Stories
‘McTacoHut’ Marks the End of An Era in RestonPet of the Week: Elliot