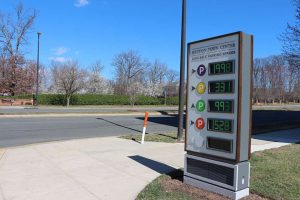 The Reston Merchants Association is not backing down in its opposition to paid parking at Reston Town Center, which it says has drastically hurt business.

In an announcement Tuesday, the group’s organizers says they plan to hold a town hall-style meeting in May to discuss the issue. Merchants, community leaders, elected officials and more will be invited to speak and take questions from citizens. RTC owner Boston Properties, which implemented the paid-parking system in January, will also be invited to participate in the event, according to the announcement.

In addition, the Merchants Association says it plans to work with community organizers to hold a march and rally in June to protest the paid-parking system. A march earlier this month, organized by citizen group Reston United, saw hundreds of participants. 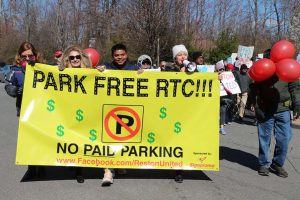 “The community has spoken and they are fed up with paid parking,” said Aaron Gordon, owner of Red Velvet Cupcakery and the head of the Merchants Association. “Not only is it expensive, but the app that people have to download to park is onerous, complicated and an invasion of their privacy. People don’t want to hand over their license plate number and credit card information to Boston Properties. As a result of all of this, we see that many of our best customers are boycotting RTC altogether and others have said they will never come back.”

Last week, one restaurant in the Town Center — Jackson’s Mighty Fine Food & Lucky Lounge — filed a lawsuit against Boston Properties, arguing their lease agreement was violated by the paid-parking system and that it has been an impediment to conducting business. In Tuesday’s announcement, the Reston Merchants Association says its supports the suit and “is likely to seek similar legal action for similar reasons in the following month.”

Boston Properties has so far not backed down from the system, which charges $2/hour in parking garages Monday through Friday and $3/hour for on-street parking Monday through Saturday. It has said the impact of the system on Reston Town Center business has been “far less” than claimed. 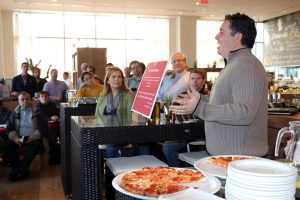 The Reston Merchants Association, however, says retailers and restaurateurs have seen “sinking sales figures” and a “precipitous drop-off in foot traffic” in 2017. They say that is directly related to Boston Properties’ paid-parking initiative.

Figures reported Tuesday by the Merchants Association, which they say were provided with consent from companies’ owners or corporate officials, include:

“Paid parking is simply killing business, ruining our reputation and destroying the sense of community that has always been the pride of Reston,” Gordon said. “The merchants are suffering across the board from the greedy money-grab of one company and many of us are being driven out of business.”